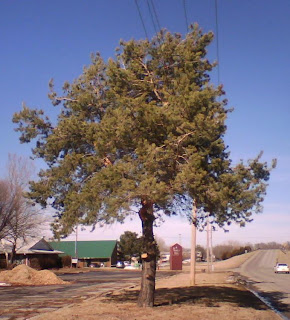 Prepare for convoluted: When I was in college, the guy I was dating at the time took one of the 300-person biology classes at the University of Nebraska. One of their projects for the semester was to "adopt" a tree. They were to pick one tree out on campus (which has an arboretum, but essentially is one) and watch it. They wrote essays about it, took samples from it, documented its reproductive cycle, well, you get the idea. My bf was a serious overachiever (as if this isn't obvious because I know this much about a class project he was doing at a college that I didn't even go to), and we spent a significant amount of time with that tree that semester.

The building where I work isn't in an industrial park, exactly, but it's definitely not neighborhood-ish. Above is the tree that I can see out Andrew's window. I can't show you, because I can't get it to work with the phone, but right now it's literally the only green thing out the only window I can see from my desk. I've become a little obsessed with it, and I thought I'd take it to a new level. So, in the spirit of Dr. Janovy, expect to see it show up here from time to time.

They've recently chopped the heck out of it, and it's partially tangled in whatever lines are on the telephone poles that go up the street, but the shape of it intrigues me, and it has glimmers of the tenaciousness of those at the treeline in the mountains.

The full introduction to my tree: from the left and the right. 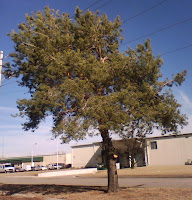 And a couple of close ups: 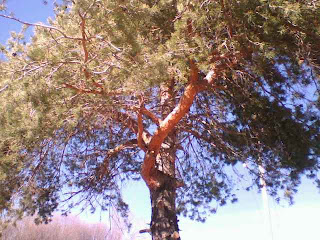 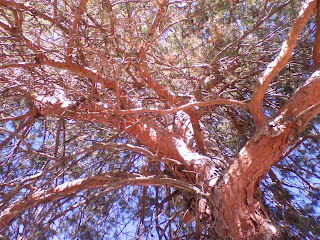